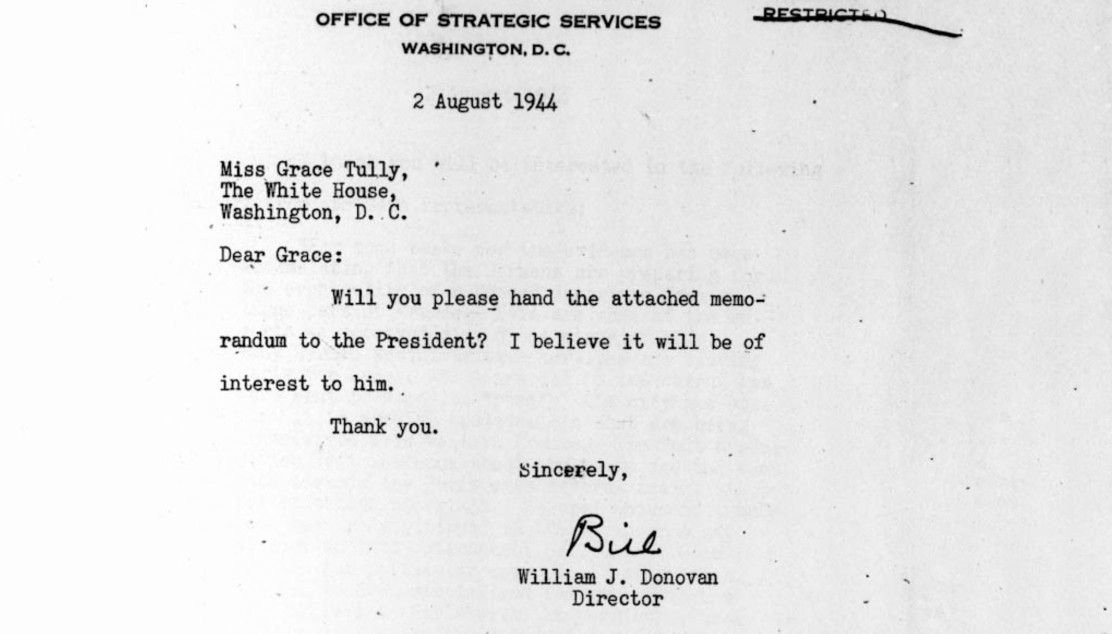 To carry on this months theme of the podcast I went looking for some information on the Office of Strategic Studies in the British National Archives.

I turned up this series of reports from Allen Dulles in Bern, sent to Bill Donovan (head of the OSS) then forwarded to President Roosevelt. They are dated August, 1944.

Dulles was the star of the OSS during the war, he managed to get agents inside the Nazi Regime and knew of Operation Valkyrie before it happened. Though for all that his intelligence on the capitulation of the German Generals on the Eastern Front falls a bit wide of the mark when he reports:

“These leaders in the East will try to bring about a peace with the USSR after a German defeat is a certainty.”

In another report he states that crack SS Divisions are being sent to the Western Front as they can be relied upon to not surrender, the fanaticsm of youth keeps them fighting. Whereas those older Wehrmacht units, who might be prepared to surrender in the West, are most unlikely to surrender to the Russians so are being sent East.

It makes for fascinating reading. Later in the month Dulles talks about the outcome of the July Bomb Plot, which Hitler survived.

“[By august] the German press has largely stopped speaking of the matter, after having devoted so much attention to the 21st and 22nd of July. He adds that the measures of reprisal have filled prisons, and that schools and other large public buildings are being used as supplementary jails”

You can find the reports on the National Archive website here.

Shooting Up: A Short History of Drugs and War